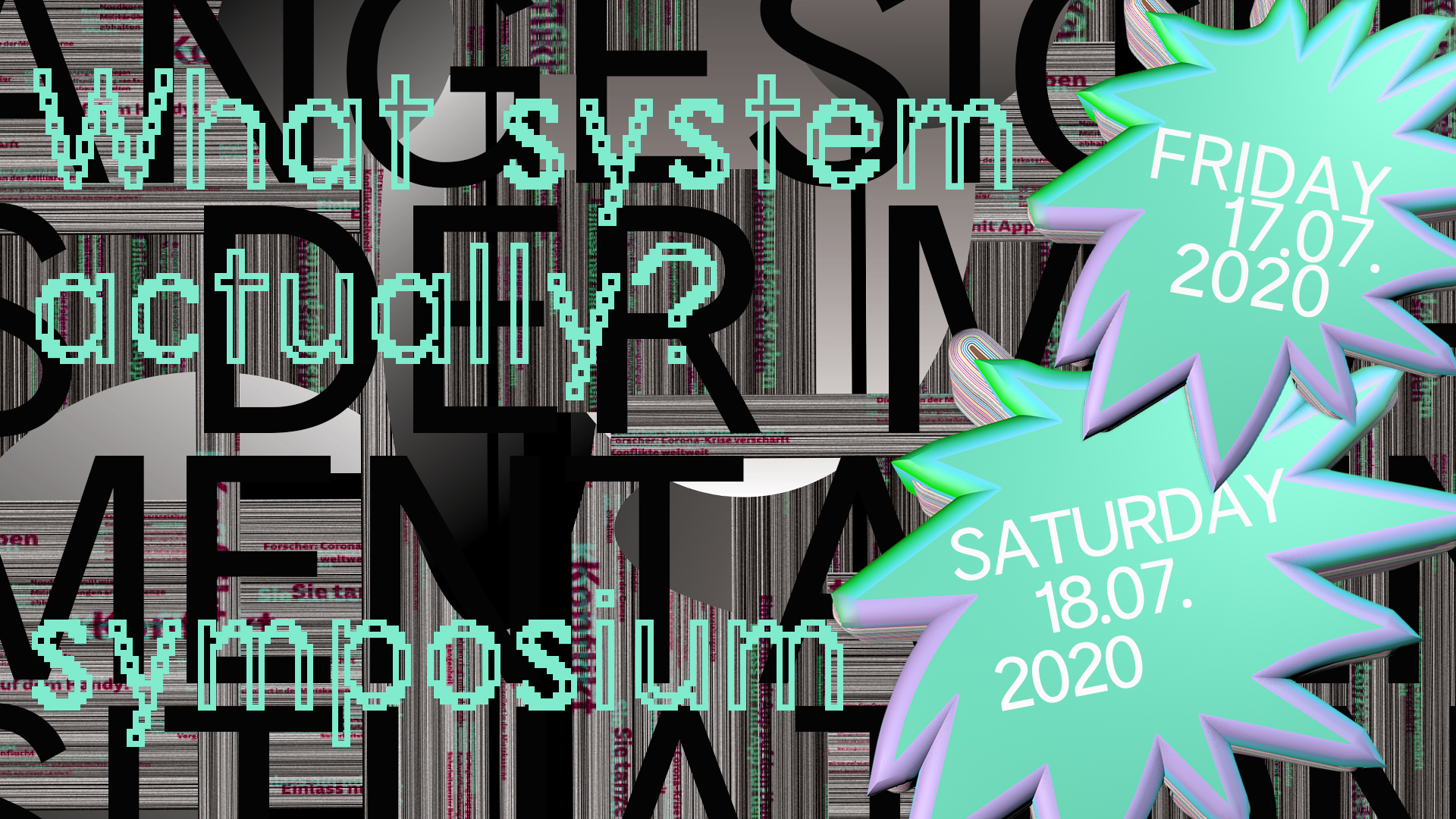 The two-day symposium entitled "What System Actually" refers to the German term "System-relevant", in reference to the essential workers "necessary" to keep "the system" running during the ongoing pandemic. Paradoxically, the pandemic has amplified the very exploitative conditions of neo-liberal capitalism, exposing the precariousness of many of the system's "relevant" workers. Through this symposium we would like to interrogate "the system" through thoughtful conversations about the potential to move beyond notions of competition & exploitation.

Aiming to imagine alternatives and share strategies about how to make this happen, we will take a close look at questions regarding art and activism; the democratisation of democracy; precarity, labour and migration; the structures of cultural institutions and their involvement with the private sector; the commoning of institutions and digital commoning practices; the decentering of western exhibition histories and the actual relevance of art in societies.

The symposium will take place on Zoom, which is a private and commercial communication tool officially provided by the University of Kassel – and will be available as a video- and audiostream on station of commons, an open source online platform. This broadcasting alternative opens the symposium up to a wider audience and poses the question: What system actually?

With artistic and discursive contributions by:

In collaboration with: Station of Commons http://stationofcommons.org/

To join the symposium, please enter the zoom link or streaming plattform on http://stationofcommons.org/

On Art and Activism, Ayşe Güleç

A dialogue with EhChO, a collective experience that responds to the urgencies unleashed by the novel coronavirus global pandemic, and in particular to its effects on already economically dispossessed and politically persecuted and disenfranchised persons, communities and territories, mostly, but not exclusively, in/from the South, and in particular within Brazil.

A discussion with nominees of the Prize of the Nationalgalerie 2017 Iman Issa, Jumana Manna and Agnieszka Polska

Music sounds better with you. Helsinki and Kassel b2b

Filmscreening: Serpent Rain
Serpent Rain is as much an experiment in working together as it is a film about the future. The collaboration began with the discovery of a sunken slave ship, and an artist asking a philosopher – how do we get to the post-human without technology? Introduced by Lorena Vicini

A conversation with Nataša Ilić and Sabina Sabolović (WHW )

What happened actually? Reflections of the talks so far

Whose exhibitions? Whose World?

A talk on exhibition histories between Lorena Vicini and Nora Sternfeld

Sounds and Specters of Exhibition Histories

Blitz And Other Exhibition Strategies in The 80s In Naples

One Agreement: A Curatorial Reportage

Noise performacneces in the Soviet Union in 1920’s

documenta as a Haunted Exhibition