In the frame of HOW? WOW! WOW ... Knowing differently in Exhibtion Studies 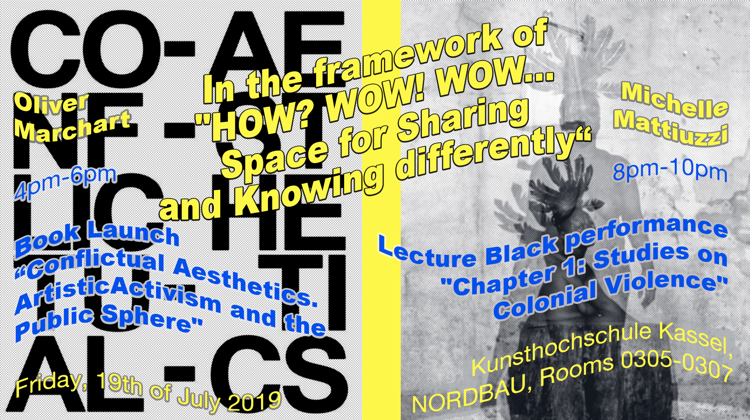 In the framework of “HOW? WOW! WOW… Space for Sharing and Knowing differently”, a Collaboration between “Redaktionelles Gestalten” (field of “Visuelle Kommunikation”) and the transnational, transdisciplinary research seminar “Exhibition Studies” of the documenta professor, department of art history and theory, two events will take place on 19 July

A new political theory of art and artistic praxis

Leaping into current debates about the political efficacy of art, the essays in Conflictual Aesthetics critique the supposition that all art is inherently political. Opposed to the political art defended by art world functionaries that hides behind “simplistic complexity,” Oliver Marchart argues for a straightforwardly political theory of art and artistic praxis. At the intersection of art theory and radical politics, he proposes an aesthetics of agitating, propagating, and organizing, through which he problematizes and evaluates art in relation to activism or political propaganda, and addresses the radical potential of dance, theater, artistic re- and pre-enactments, public art, the curator, and the biennial.

Oliver Marchart is a political theorist and philosopher. He is currently professor of political theory at the University of Vienna. His books include Post-foundational Political Thought: Political Difference in Nancy, Lefort, Badiou and Laclau (2007), Thinking Antagonism: Political Ontology after Laclau (2018), and the forthcoming Post-foundational Theories of Democracy: Reclaiming Freedom, Equality, Solidarity.

In this lecture, Musa Mattiuzzi presents the first chapter of a larger project under construction, which aims to reflect on the aesthetics of the colony. “Chapter 1: Studies on Violence” from the experience in performance in the last 12 years, the artist proposes an anticolonial poetics and an investigation exercise of the colonial wound. She investigates the possibilities of creation for a Brazilian black colonized in transit and outlines the possibility of carrying out these studies within the context of art in the international arena.

Musa M. Mattiuzzi is a performer, writer and researcher (blackness performance studies). She holds a degree in Communication from the Arts of the Body from the Pontifícia Universidade Católica de São Paulo. Her work subverts the exotic place attributed to the black woman's body by the white cis imagery, which turns it into a kind of aberration, an entity splitted between the wonderful and the abject. Musa participated in the 32nd São Paulo Biennial, at the Political Imagination Workshop where he published the text "merci beaucoup, blanco! - performance photography experiment. “In 2017, she took part in the Capacete Residency Program (Athens) - documenta 14. In the same year, in the city of Salvador and Rio de Janeiro presented the new work "Whitenography and performance on white paper "at the exhibition "Implosion" (Hubert Fichte), and was also awarded the film "Experimenting with the Red in the Flood" as the best short film in the X Janela Internacional de Recife. In 2018, she participated in the 33rd Biennial of São Paulo, in the afro-affective affinities project. She lives in Brazil between the cities of Salvador, São Paulo and Rio de Janeiro.